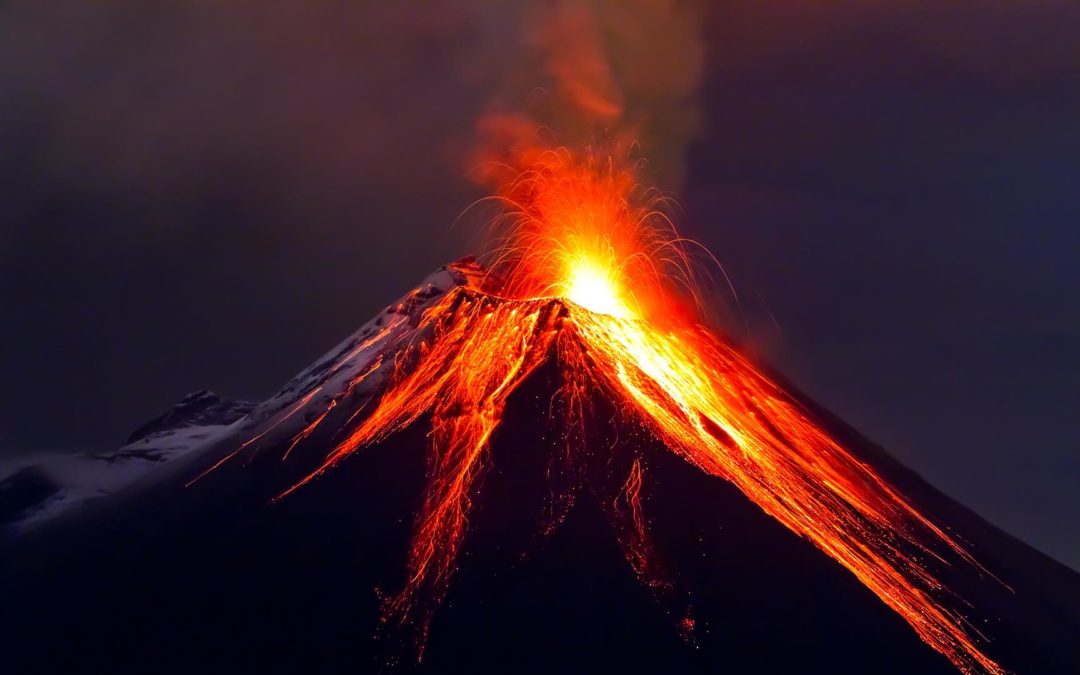 This provides an example of how much heat a volcano can generate.

And this is not the only lake that’s running hot.

This was just short of the highest temperature ever reached since the lake was re-established in 2002, say volcanologists from New Zealand’s Institute of Geological and Nuclear Sciences (GNS).

“The temperature of Crater Lake is a measure of amount of volcanic heat coming from Ruapehu,” Mazot added.

“The crater lake is a fairly big puddle and if you can heat that up to 40C, it takes a fair bit of energy,” says GNS Science co-ordinator Brad Scott.

Not only is it a good-sized lake, it’s almost completely surrounded by ice and snow.

By all rights, this high-mountain lake should be frozen solid. Instead, it’s warmer than the average hot tub.

Do you know how much energy it takes to heat a hot tub to a mere 101 degrees? Depending on how much you use it, and whether you keep it covered, it can run $30, $40, even $50 per month just for the electricity or gas.

Now imagine how much it would cost to heat an entire high-mountain lake to 108 degrees, a lake that is not covered. You’d need your own coal-fired generating plant.

That’s not as far-fetched as you may think.

Last month, an article in Science Daily (Mar. 28, 2011) asserted that “between 75 and 80 per cent of all volcanic activity on Earth takes place at deep-sea, mid-ocean ridges.

Unfortunately, that figure is so far off the mark that it’s laughable.

Twenty years ago when I began my research for Not by Fire but by Ice, scientists thought there might be 10,000 underwater volcanoes in the entire world. And even back then, they believed that 80 percent of all volcanic activity occurred underwater.

Then in 1993, marine geophysicists aboard the research vessel Melville discovered 1,133 previously unmapped underwater volcanoes off the coast of Easter Island.

Though some of the newly discovered volcanoes rose as much as one-and-a-half miles above the seafloor, their summits still remained half a mile below the water’s surface.

All this in a comparatively small area of only 55,000 square miles, about the size of New York state.

The geophysicists had increased the known supply of underwater volcanoes by more than ten percent just in a matter of months.

That was 1993. Today, scientists estimate that there are more than three million underwater volcanoes. That’s a three followed by six zeroes!

In 2007, oceanographers Hillier and Watts surveyed 201,055 submarine volcanoes. “From this they concluded an astounding total of 3,477,403 submarine volcanoes must reasonably exist worldwide,” said this article by John O’Sullivan.

Hillier and Watts “based this finding on the earlier and well-respected observations of Earth and Planetary Sciences specialist, Batiza (1982) who found that at least 4 per cent of seamounts are active volcanoes.”

According to Batiza’s survey, the Pacific mid-plate alone contains an incredible 22,000 to 55,000 underwater volcanoes, with at least 2,000 of them considered active.

Thinking that anyone could know exactly how many volcanoes lurk beneath the surface of the ocean is ludicrous, of course. But that 3,477,403 number, coming from two well-respected oceanographers, does reinforce my point rather nicely, namely, that underwater volcanoes are heating the seas.

To go from 10,000 underwater volcanoes to more than three million in less than 20 years shows how little we knew – and how little we still know – about this incredible force of nature. We know more about the moon.

The same could be said about our knowledge of the Arctic.

During the last ice age when large swaths of Canada were covered by a thick layer of ice measuring one to two miles thick, only a thin layer of floating ice – about the same as today – covered the Arctic Ocean.

This lack of ice has long posed a conundrum for scientists. How could such large portions of Canada have been buried beneath so much ice, while the Arctic Ocean remained about the same as today?

Add underwater volcanoes to the mix, and the mystery is solved.

Look at the Gakkel ridge. The Gakkel ridge is a gigantic underwater volcanic mountain chain stretching some 1,100 miles (1,800 km) beneath the Arctic Ocean from north of Greenland to Siberia.

With its 3-mile-high summits, the Gakkel ridge, the northernmost portion of the mid-ocean ridge system, is far mightier than the Alps.

In 2006, two research icebreakers, the “USCGC Healy” from USA and the German “PFS Polarstern,” joined forces in the international expedition AMORE (Arctic Mid-Ocean Ridge Expedition). On board were scientists from the Max Planck Institute for Chemistry and other international institutions.

The scientists had expected that the Gakkel ridge would exhibit “anemic” volcanic activity.

Instead, they found “surprisingly strong magmatic activity in the West and the East of the ridge and one of the strongest hydrothermal activities ever seen at mid-ocean ridges.” Indeed, magmatism was “dramatically” higher than expected.

“We expected this to be a hydrothermally dead ridge, and almost every time our water measurement instrument came up, they showed evidence of hydrothermal activity,” said Dr. Jonathan Snow, leader of the research group from the Max Planck Institute. “Once we even ‘saw’ an active hot spring on the sea floor.”

So there you have it.

If a single volcano can heat a high-mountain lake to 108 degrees, imagine what an eleven-hundred-mile-long chain of underwater volcanoes could do to the Arctic Ocean.

And imagine what thousands of underwater volcanoes could do to the rest of the world’s oceans.

The Mid-Atlantic Ridge snakes through the centers of both the North and South Atlantic Oceans. Circling the southern tip of Africa, it then turns north into the Indian Ocean, twisting around the globe like a raised seam on a baseball for more than 15,000 miles. And it’s built entirely of huge underwater mountains, huge underwater volcanoes.

For a glimpse of the process at work, look at Iceland, where the Mid-Atlantic Ridge pokes a tiny portion of its massive shoulders out of the frigid waters of the North Atlantic. When you recall how volcanic activity in Iceland shut down air travel over most of Europe last year, you begin to get an idea of how much volcanic activity must be occurring deep beneath the surface of the seas. And that doesn’t even count the other mid-ocean ridges. Or look at the 2,350-degree hot lava pouring almost constantly into the ocean around Hawaii.

We still have a lot to learn about underwater volcanoes, but while we’re waiting, please stop blaming humans for heating the seas. We have nothing to do with it.