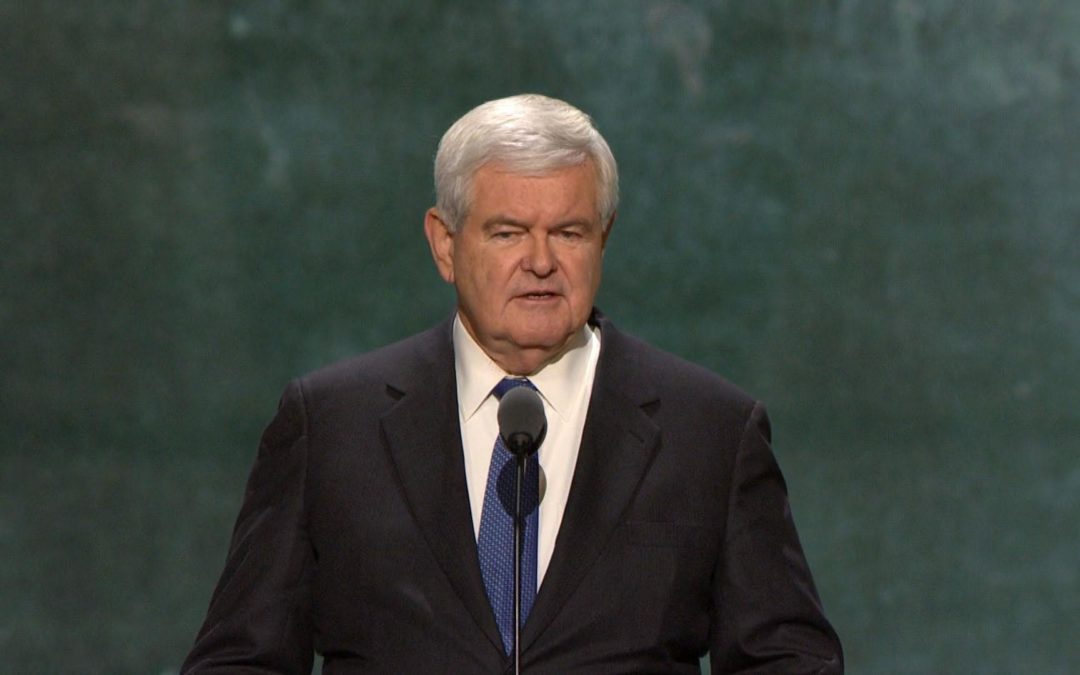 The most-heralded achievement and high water mark of Republican leadership since the revival of America’s military superiority under Ronald Reagan is, without question, the coming forth of the “Contract With America” during the election of 1994.

Its 100-day surge through the House of Representatives, with its visionary agenda and its promise and delivery of lock-arm partisan voting, is a singular feat; such a one that ever since Republicans have looked back with fondness and longing for a revival of ‘the good old days.’

Seven years later, as election 2000 approached, conservative Republicans, unhappy with the current party, unhappy with their wishy-washy candidate-in-chief (former Texas Governor George W. Bush), still held out hope that Governor Bush or some other Republican would rise up, Newt Gingrich-like, with charisma, courage and acumen, and take a firm grip on the reins of the party, take the heat, and show the American people what the Republican Party and conservatism is really all about.

But why all the nostalgia for the “good old days”? Are we really sure that they were that good and that conservative? For missing in action in this dreamy partisan memory of everything lovely is the honest reality that things weren’t so lovely after all. The conservative Contract With America was deceptively liberal, if not radical, the strong-arm “in house” tactics of its chief proponent were anything but democratic, and the same man’s established political loyalties were ironically tied to the very political movement he was tough guy-like fighting – even Clinton, Gore and the Third Way.

A few knew this from day one, but most failed to see the connection even though Newt Gingrich — give him points for honesty — laid it in the open on more than a few occasions for those who cared to listen. Few did.

On November 11, 1994, still bubbling and cocksure over the Republican takeover of both houses of Congress, his coming coronation as speaker of the House, and his anointing as king of the Republican Revolution, Congressman Newt Gingrich couldn’t resist taking advantage of the moment to put in a free plug for something he so devoutly believed in.

“The core of our Contract” and the solution for those “trying to figure out how to put me in a box,” he said, could be found in a book by futurist Alvin Toffler called “The Third Way,” to which he added, “I am a conservative futurist.” (1)

Futurism, as already alluded to, is one and the same with the Third Way or Third Wave, but for brevity’s sake Webster’s Dictionary gives us another take on Mr. Gingrich’s confession:

“Futurism: Study of, and interest in, forecasting or anticipating the future, or theorizing on how to impose controls on events.” (2) (emphasis added)

I’m sure my Republican friends won’t like this: but it would not be a stretch on futurism to sum it up thus: communism with economic vision. That is certainly how the futurists of the Third Way describe it. If so, what, then, is a conservative futurist? Well, if Mr. Gingrich was being honest about his agenda (which became the agenda of the Party), it is individually: a post-1994 Republican; and in policy: The Contract With America, the go-along, get-along policies of a party that for the next six years caved under Clinton. It is, also, the faith-based subsidies, public-private partnerships, fast-track hopes, and the bipartisan spirit of the 2000-2008 Compassionate Conservative movement;—the latter movement having its start in the already in place proposals, legislation, and underlying principles of the Gingrich inspired Contract With America.

As fictitious as this may have sounded to the average pre-Tea Party party partisan who presumes his party is as conservative as the talk show hosts who promote it, confirmation of it all comes in spades as we consider the sincerity and depth of Gingrich’s relationship with the same center/left of center Third Wave/Third Way that pummeled our country under Clinton and Gore.

Gingrich revealed to Congress: “For a long time, I have been friends with Alvin and Heidi Toffler, the authors of ‘Future Shock’ and ‘The Third Wave.’ (3)

“I first began working with the Tofflers in the early 1970s on a concept called anticipatory democracy. I was then a young assistant professor at West Georgia State College, and I was fascinated with the intersection of history and the future, which is the essence of politics and government at its best.

“For twenty years we [who’s we?] have worked to develop a future-conscious politics and popular understanding that would make it easier for America to make the transition from the Second Wave civilization [the one our Founders gave us] – which is clearly dying – to the emerging, but in many ways undefined, Third Wave civilization [Alvin Toffler’s Centrist Utopia].

“The process has been more frustrating and the progress much slower than I would have guessed two decades ago. Yet despite the frustrations, the development of a Third Wave political and governmental system is so central to the future of freedom and the future of America that it must be undertaken.” (4)

So central, so critical indeed, that Mr. Gingrich put the book on a recommended reading list for members of Congress and all Americans. And mind you, he wouldn’t let go of it. In speech after speech and press conference after press conference Gingrich referred to “The Third Wave” as “the seminal work of our time.” (5)

For those who hadn’t read it or who knew nothing about the Third Way/ Third Wave (he used both names) Gingrich delivered a few extra hints of where the Third Way was taking him.

“While I am a Republican leader in the Congress, I do not believe Republicans or the Congress have a monopoly on solving problems and helping America make the transformation necessary to enter the Third Wave information revolution. Democratic mayors like Norquist in Milwaukee and Rendel in Philadelphia are making real breakthroughs at the city level. Some of the best of Vice President Gore’s efforts to reinvent government nibble in the right direction. …” (6)

To those conservative freshman just elected, those dyed-in-the-wool conservatives already in a hot war with Clinton and Gore, and those millions of Americans who had just swept this Republican Revolution into power, nothing could have smacked more of betrayal of the traditional conservative values they thought these champions of conservatism were promising them than this.

Wake up call, Congressman Gingrich wasn’t kidding. He really had a thing for the Third Way and a peculiar partnership with what are now commonly referred to as “new Democrats.”

Toffler concurs. In his next book, “Creating a New Civilization: The Politics of the Third Wave,” Toffler writes:

“In 1975 at the request of Congressional Democrats, we organized a conference on futurism and ‘anticipatory democracy’ [the latter being the political game plan of the former] for senators and members of the House. We invited Newt Gingrich, probably the only Republican among the many futurists we knew. He attended.

“That conference led to the creation of the Congressional Clearinghouse on the Future, a group eventually co-chaired by a young senator named Al Gore, now vice president.” (7)

Gingrich, Gore-like, would rise within the Third Wave/Third Way movement, would become a member of the executive committee of the Congressional Clearing House on the Future, and would win the praise of leftist, “ex”-Marxist Toffler as possibly “the single smartest and most successful intellectual in American politics. …” (8)

As “probably the only Republican among the many futurists” Toffler knew Gingrich’s involvement in the movement was not what one would call “conservative” by traditional standards.

The book throughout extolled the virtues of “participatory democracy,” a revolutionary slogan dear to the likes of Tom Hayden, Derek Shearer and Bill Clinton, and one drawn directly from the eighth plank of the “Humanist Manifesto II (1973).” (9)

By 1984 Gingrich’s influence in the Third Way movement was so far to the left that it brought on kudos from the likes of New Age “philosopher” Mark Satin.

Mr. Satin is certainly no ordinary American. In his “New Age Politics” (1978), a guide to New Age political thought, he called for planetary governance, a system of world taxation (on resource use), an increased transfer of wealth from rich to poor countries (international communism), and complete military disarmament. He rounded this ode to Marxism out by stating, in no uncertain terms, his hostility for the nuclear family, traditional marriage, and heterosexual society. (10)

So what did such a one as this think of “conservative” Newt Gingrich? In the February 27, 1984, issue of “New Options,” Satin singled out Newt Gingrich as a top “decentralist/globally responsible” congressman (11) – not the kind of praise any true conservative would want on his resume. As for the odd phrase, “decentralist/globally responsible” congressmen, this is the kind of interesting paradox that fits the fishy decentralism of the Third Way, a decentralism that seeks to move power not just down to the local level [where under the Constitution most political power belongs], but oddly up to the international level (which is fully at odds with America’s War for Independence, the Founding Generations vigorous objections to permanent and entangling alliances, and so far beyond their greatest fears concerning centralized power that it is off the charts crazy!).

Not surprisingly, then, ten years later, in the wake of the passage of NAFTA, globalist Council on Foreign Relations Republican Insider Henry Kissinger would be heard bragging here, there, and everywhere, that the man most responsible for giving us NAFTA (what Kissinger called the important checkpoint on the way to a New World Order) was none other than Newt Gingrich.

Gingrich, more than any other man, was responsible for fast-tracking NAFTA and GATT through Congress in December of 1994 (call it a gift to Third Wayer, President Clinton), shortly before the incoming ‘revolutionary’ Republican dominated Congress (which had it been given the chance to vote on it, would likely would have defeated the treaties) took control. An example of things to come from this ‘conservative’ futurist.

And perhaps it all fits: heralded Republican Third Way Futurist Newt Gingrich emerges from the right, and at the same time his comrade Third Way Futurist Al Gore and his pal Bill Clinton burst upon the scene from the left. Gingrich promised to take Clinton and Gore down and out for the count; in the end Gingrich preserved their radical agenda by bringing to the plate a more palatable and patient — call it a more progressive — center/right push to the left.

Read more from “Democrats In Drag: Foreword; Part 1, Technology, Sovereignty, and the Third Wave; Part 2, Clinton and Blair’s Center-Left Democracy ; Part 3, Gingrich, Toffler, and Gore: A Peculiar Trio; Part 4, Groveling in the Gutter of the Gulags; Part 5, Eradicating the U.S. Constitution by Design; Part 6, Contract With America: The Betrayal Begins; Part 7, Using Jefferson as a Cloak for Revolution; Part 8, Term Limits and the Citizen-Legislature Scam.

Steve Far­rell is one of the orig­i­nal pun­dits at Sil­ver Eddy Award Win­ner, NewsMax.com (1999–2008), asso­ciate pro­fes­sor of polit­i­cal econ­omy at George Wythe Uni­ver­sity, the author of the highly praised inspi­ra­tional novel “Dark Rose,” and edi­tor in chief of The Moral Liberal.